Tonight, Addy’s worst enemy might be an irritable cop, just bored enough to be curious. She ducked into the station and melted into the waiting crowd, most of them jazzed up to celebrate the night before New Year’s Eve. As she groped in her pocket for the change she’d been saving, she caught a glimpse of herself in the metal frame of one of the posters lining the stairs to the subway. White face, huge eyes, the dirty and oversized clothing of a runaway. She bought a one-ride MetroCard, slashed it through the reader, and clacked through the gate onto the platform, softly chanting the directions Rafe had made her memorize: Subway from Harlem to Grand Central, shuttle to Times Square. N, Q, R, or W train to 33rd Street, PATH train to Hoboken.

‘Chicklet! What brings you out tonight?’

Her heart plunged, hearing her street nickname. It was Des, the dealer who worked the grid a couple of blocks away from Georgia’s place. Addy always tried to stay far away from him. She’d seen what had happened to some of the other girls, who’d taken the samples he offered and then got hooked and desperate. Bad enough to service the special gentlemen Georgia introduced them to.

Des sauntered over and squeezed her chin with cold fingers, turning her face, forcing her to meet his gaze. ‘Where you going, girlfriend?’ He wore his hair greased back into a ponytail, a fringed vest, his eyes dark and mean like a hungry reptile.

Fear and the fetid heat of the subway tunnel pressed in, making her feel nauseous and crampy. She wrenched free, bolted to the trash can, Des on her heels, and heaved out the contents of her stomach.

‘Whoa,’ said Des, stumbling back. ‘What you been drinkin’, baby?’

Maybe if she ignored him, he’d leave her alone. At the very least, she knew he’d tell Georgia tomorrow that he’d seen her. Maybe sooner. The subway car thundered through the tunnel and screeched to a stop in front of her. The people waiting began to shove forward. Without looking back, she drafted behind a tall man and flung herself through the doors, nearly landing on three girls dressed for a holiday party wearing Santa hats, spike heels, and loads of sparkly make-up.

‘Dude, watch where you’re going,’ said one in a disgusted voice.

With no seats empty, Addy lurched from one pole to another and slumped in the far corner of the car, keeping an eye out for Des. Once it seemed he hadn’t followed her, she dropped her gaze to the speckled linoleum floor. Which reminded her of the kitchenette in her mother’s trailer in Waterbury. If only she had the kind of mother she could call when she was in trouble. The kind of mother who baked snickerdoodles to serve with a frosty glass of milk after school, who brought saltines and ginger ale when her kid was sick.

Fierce-hot tears stung her eyes and she rubbed them away and straightened her shoulders. Halfway there – she just had to make it to Rafe. Now that she was speeding away from Georgia and not quite as scared, her stomach hurt so badly she could barely think. She squeezed her eyes shut and tried to imagine the beach Rafe had told her about, where there was always a party. She fingered his phone number on the scrap of paper in her jacket pocket.

The subway car clattered through the Upper East Side and lurched to a stop at 42nd Street. She pushed out through the throngs – the people coming in as hurried as the ones going out – then made the transfer from the subway to the shuttle, and finally darted onto the F train. Almost there. At the next stop, she would take the PATH train that would cross the river and leave her in Hoboken where Rafe would pick her up and take care of her.

A bulbous-nosed man wearing a dirty blue cap with goofy earflaps staggered onboard behind her. He sat across from her and began to read a rumpled copy of the New York Post. A group of young men dressed in black clung to the pole nearest to her, taunting each other about how much they’d drink that night and who would nail the girls. The odors and noise of the car and the rocking motion made her feel as though she might vomit again. Or something worse – she was cramping, cramping. She closed her eyes, rested her head on her arms, folded them over her rounded lap, and breathed.

An automated voice announced they were approaching Delancey Street. In a flash of panic, she realized that in her haste to get away from Des in Harlem, and then to make it through the hordes of people underground at 42nd Street, she’d taken the wrong line. This train would deliver her to Brooklyn, not New Jersey. No one was waiting for her in Brooklyn. No one.

A painful stomach cramp hit and she doubled over and moaned. The earflap man looked up from his newspaper, drooled, and jabbered something unintelligible.

‘Shut up, you crazy old coot,’ yelled one of the boys.
She had to get to Rafe.
As she surfed through another wave of agony, she began to sweat. The earflap man, still watching her, grew more agitated. When the train ground to a stop, she grabbed the plastic bag containing her belongings and staggered out to the platform with a few other travelers.

‘Carry on, brave soul!’ the man called to her as the doors slid closed.

The walls of this subway stop were paved with white tiles trimmed in blue and black. She perched on a wooden bench as the pain washed through her belly, trying to focus on the designs on the walls – fish, a bowl of cherries, an enormous trout. It was after nine there was no attendant in the fare booth. The small news shop was closed and barred. And no pay phone in sight to call Rafe.

Everyone else who’d gotten off had already rushed up the stairs and out into the night. The pain twisted her gut again. What if something was terribly wrong and she died right here in the freaking subway station? She thought about using the emergency phone tucked into a corner by the stairwell. Police and paramedics would come. She’d be taken to a hospital with clean sheets and drugs for the pain. She moaned at the thought of such welcome relief.

She spotted a restroom on the far side of the station – Out of service, closed for cleaning, the sign read, but the door was cracked ajar. She hobbled over and pushed the door open. The small bathroom stunk of urine. The trash can overflowed with dirty diapers, cigarette butts, and other unmentionables, and the sink was stained an ugly brown. Someone wearing a pair of ratty sneakers was slumped in the first stall.

The person snorted and a hypodermic needle clattered to the floor.

She rushed to the last stall, locked the door, stripped off her coat and sank down onto the toilet. The pains rode through her faster now, splitting her open. Oh, holy freaking god, the baby was coming. She clutched the filthy toilet seat, screamed into the padded recesses of the down coat. She needed help. Extracting the man’s phone tucked in the bottom of her garbage bag, she turned it on. She’d tried this once before, but had frozen at the thought that his people might be able to track the phone and find her. Surely she could dial 911.

But then what? If the authorities came, they’d take the baby and make her go back to her mother’s trailer in Waterbury, or more likely, another foster home. They wouldn’t let a sixteen- year-old loose on the streets. And she couldn’t return to Harlem. Georgia would kill her – literally – if she showed up without the kid. She began to sniffle, thinking of poor Heather, sleeping in their room. And Rafe, waiting for her in Hoboken. Waiting to start their new life, furious that she’d blown him off.

No. She would do this alone. And then keep going.

What seemed like hours later, after a terrible, searing contraction, she felt an overwhelming urge to push. Minutes later, she sagged to a crouch on the floor and the baby slid out. After a second wrenching wave, she pushed out a disgusting bloody pancake attached to the infant by a cord. She felt sick and weak and scared and empty, as if she’d lost something that belonged deep inside her. Blood everywhere and a salty, earthy odor like nothing she’d ever smelled. The child began to whimper.

What did doctors on TV do after a baby was born? Tie the cord and cut the kid loose, she thought.

She rustled through her bag and pulled the string from the hood of her sweatshirt, tried to figure out what to do. She could tie it off, but she had no knife or scissors. Forget it. The baby began to gurgle, winding up and letting loose a miniature howl.

‘Shhh, shhh, shhh,’ she crooned as she picked up the creature and jiggled. ‘You’re here. It’s me. We’re OK.’ They weren’t, but why scare the kid so early by telling it how bad things were?

Bowlegged and pointy-headed, it looked like the star of her favorite movie growing up: ET. Ugly, but cute. Yanking a pink T-shirt from the garbage bag, Addy exchanged this clean one for the extra-large one she’d been wearing. She hobbled to the sink, wet the cleanest part of the old shirt, dabbed the baby’s face, and swiped at the greasy white substance in the creases of its legs. A girl, she noticed, and then touched in turn each tiny but perfectly formed finger and toe. The kind of girl who might be called Emmeline or Maisy. Who might take ballet classes after school with her mother watching from the sidelines. Her eyes flooded with tears.

No, she could not afford to feel one more thing.

She wrapped the baby and the attached pancake in the discarded T-shirt and then her coat, knotting her into a tight bundle with the arms of the jacket. Then she wiped the blood from her own legs with her stained pants and stuffed them in the garbage can. She rattled the metal box on the wall until a maxi-pad dropped loose, and then dressed in clean underwear and her other pair of flannel pants. The baby watched, blinking rheumy eyes, taking little sips of breath. Would they turn hazel like hers? Have the same ring of brown?

Now what? She felt shocked and weak. She had no idea how to take care of a baby. And it was hard to imagine Rafe as a father figure. He’d never said they would raise her together. Why would he even want to, when he wasn’t the father? If Georgia caught her, she would take the baby. Rafe had told her that she planned to sell it, Heather’s too. After that, she’d be forced back to work. If she fought that, Georgia wouldn’t hesitate to kill her. That’s what Rafe had said. She’d be one more homeless teenager, found in an alley, dead of an overdose.

Probably had it coming. 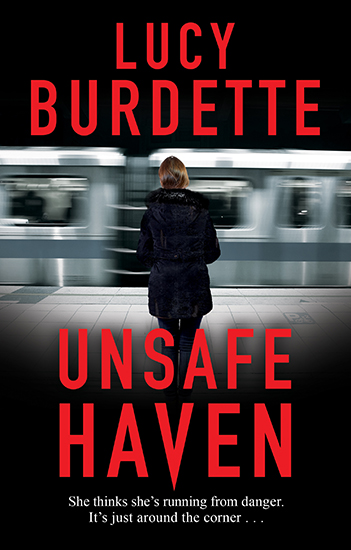